Oh Death Where Is Your Sting? 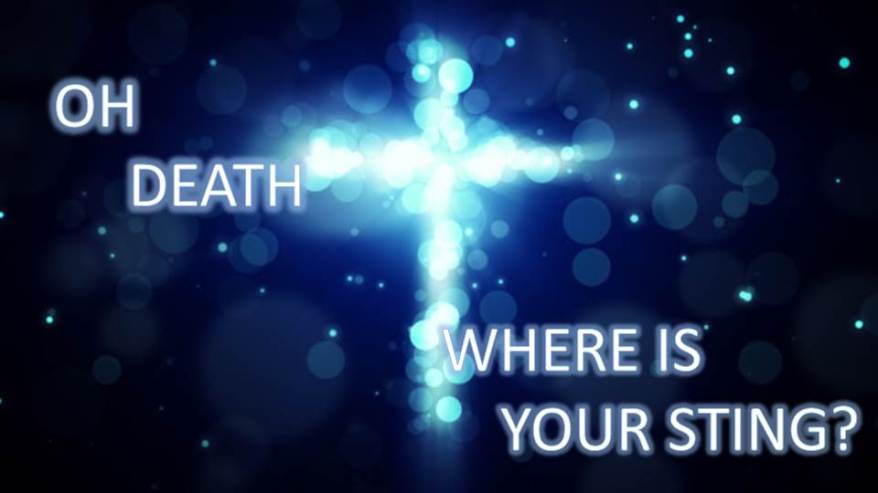 “You can’t win, Vader. If you strike me down, I shall become more powerful than you can possibly imagine.” Obi-Wan Kenobi

Yes, that is a quote from Star Wars, and yes, that is how I am beginning this. In the original Star Wars trilogy (which are the only movies worth mentioning in my mind) an aged Obi-Wan Kenobi and a mostly bionic Darth Vader are about to square off against one another. In the midst of the fight, Kenobi states this line and once Luke and the others are safely to the Millennium Falcon he pulls his light saber up and is essentially, decapitated. Later in the trilogy Obi-Wan shows up guiding Luke to Yoda for additional training, and then later we see Obi-Wan, Yoda, and his father all standing watching the celebration of the Empire’s defeat in their luminescent form. These are the casualties of the Empire’s wanton destruction and power hungry evil. All three of these men gave all of themselves for the sake of the Jedi Order and the Republic even to the point of death.

Death is a concept that freaks many of us out. If I’m left in a room long enough thinking about it, to be honest, my natural inclination is to curl up into a ball and cry. It is not a thought I wish to harbor for more than a fleeting moment, and just having to type this out is making me incredibly uneasy. But I have felt that God has burdened by heart to write on this topic and so I am going to. Death is a natural enemy of humanity. It is an evil brought forward by our own sin and for that, we have no one to blame but ourselves. When Adam and Eve sinned against God in the garden, God pronounced his judgment. Now, some have incorrectly stated the God is the one that brought about death, but this is not true. Death is a natural outworking of sin, which is why Paul states that the wages or payment for sin is death (Rom. 6:23). This makes the crucifixion of Christ all the more potent as he not only paid our penalty but paid our naturally earned death with his own.

If you aren’t “afraid” of death then let me throw some truth at you. Jesus Christ, the eternal Son of God right before his own death, was afraid. A being whose very essence exuded completely human and completely divine characteristics, knew what death was, and feared it. That says something about the nature of such a thing that the co-eternal Son of God actually fears it. In fact, Luke 22:44 tells us that he was so distressed that he had sweat dripping off of him from the stress. Some even believe that the reference to blood is describing an actual medical condition called hematidrosis where blood actually comes out of the sweat glands due to extreme stress and heightened blood pressure. It is more likely that Luke is merely using a simile when he states that the sweat was “like” drops of blood, but a more literal translation is certainly possible. So if Christ himself was afraid you should be too. This fear of death is a natural reaction to an unnatural event. Within the created order, God intended for creation to be an eternal abiding community between creation and Creator. Instead, creation (namely us) turned their backs on him and in so doing brought into creation something that was not intended. Since death was not an original part of human existence before the fall, we were created without it in mind. This is why humanity fears death.

As Christians, many still fear death and truly believe that the call of the Christian is to avoid death at all costs. Unfortunately, for such people Christ has something to say,

Pretty cryptic, huh? Well, not really. While this statement at the time it was spoken had to have seemed outrageous, to Christians it should make sense. As those who have been justified by Christ to the Father, we have been more than forgiven. Surely, God has forgiveness us, but he has also adopted us as sons and daughters. Paul writes,

“14 For all who are led by the Spirit of God are sons of God. 15 For you did not receive the spirit of slavery to fall back into fear, but you have received the Spirit of adoption as sons, by whom we cry, “Abba! Father!” 16 The Spirit himself bears witness with our spirit that we are children of God, 17 and if children, then heirs—heirs of God and fellow heirs with Christ, provided we suffer with him in order that we may also be glorified with him.”-Romans 8:14-17

In the ancient world adoption as a son or daughter by one of stature and position was to be included in their will and inheritance. It was to belong to their family, wear their signet ring, and exercise the authority of a natural born child of the parent. Adoption is a permanent condition in which we are legally brought into God’s family and given all the privileges (and responsibilities) that come along with that. If this is the case, and we are adopted by God through Jesus than as Paul states we are co-heirs with Christ. This of course is speaking to our glorified state in which we eternally exist with God on a new heaven/earth. If this is the case, then we must keep in mind that our adoption, though fixed, is not complete. We then, while on earth are charged with being representatives of Christ in a broken, evil world.

We do not stand unopposed however. Satan even now schemes to divide the body of Christ among itself hoping to slow the work of the gospel and in so doing keeping as many people from knowing Christ as possible. In the US, he does this by causing petty squabbles under unimportant doctrines and puffed up egos. In other parts of the world, he has Christians tortured, and killed thinking that in doing such a thing he keeps us from accomplishing our mission. The point of the first quote was to communicate a very Christian truth. In our current state, James tells us that our submission to God and rejection of the devil will send him fleeing. If he flees from us while we are still on earth, I can only imagine what he will be doing when he sees us in our glorified states. My guess is that he will look very similar to how his minions looked before Christ, cowering and begging for his life.

As sons and daughters beloved, we become more powerful in death. It is for this reason, that we have nothing to fear in death, for it is no longer a sentence of judgment for us, but is, for God’s elect, a doorway to something better. I am by no means telling you to throw your life away, but I am writing this to encourage you that dying for your faith in the name of Christ is a virtuous, honorable, and good thing. It is an event that should cause us joy and elation as it did Paul and the other disciples. For Paul tells us in Romans 8:17 that we are heirs when we suffer with him (notice that is a present term meaning that when you suffer Jesus suffers with us). So when I think of the above term, I aim it squarely at Satan reminding him that I am in a weakened state now, but will not always be in the future. I remind him that by bringing about suffering he merely strengthens my resolve in Christ that causes me to push even harder towards the goal. I am reminded by this that I am a son of the God of the universe, and that in him, I can defeat any foe Satan throws my way. I hope that in reading this, it does the same for you. I pray that this find you all well, and that it encourage you in your walk with Christ. Whatever difficulty you may be going through, know that with Christ, suffering and death are merely a means to an end making you better and stronger in him. Peace and blessings and as always, thanks for reading.