Chasing After The Wind 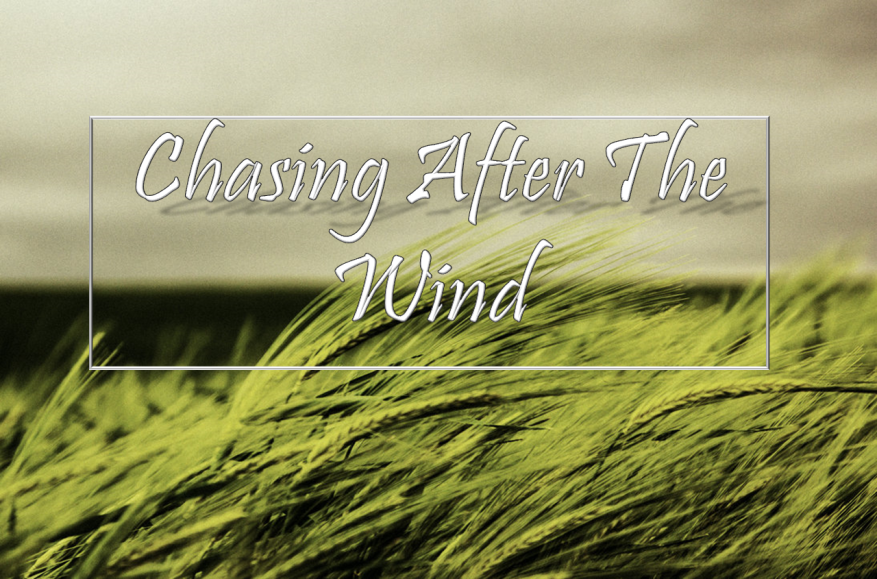 As I sat here at work, contemplating what God wanted me to type this week I could not help but feel a little frustrated. I have thoughts on things, opinions to give, but decided long ago that the content of those particular ideas were never going to make it to the page of this site. If for no other reason than to preserve unity as much as this little website can. So here I sat, thinking on what I could write that had nothing to do with those topics. It was in that moment that God directed brought me back to them, and not in a way that I was expecting. There are times when we miss the so painfully obvious that when we recognize it we do one of two things; laugh hysterically, or cringe. With this one, I laughed because for some time (the last few months) I have been allowing myself to get distracted by all sorts of nonsense like the transgender issue, politics in general, and more recently gun control. Now none of these are bad innately mind you, but they do become so when we are destroying relationships over them. Thankfully, I have not done this (I think) but I do know others who have begun cutting people (other Christians) out of their lives because of their personal beliefs. Apparently, our personal opinions are strong enough to tear apart the bonds that Christ himself has strung.

Throughout much of our lives, we come to conclusions of how our universe works based on personal perception and opinion. Some people’s approaches are more scientific, some more existential, and to others completely subjective. With each of these beliefs, we prioritize which ones are most important to us by accepting or rejecting people for agreeing or disagreeing with us. Much of this is because we buy into rhetoric or a structure of thought that is so completely angled away from God that in walking upon it (thinking we are walking closer to God) we are really walking away from him. How does this happen? Before we get there let us talk about how we as Christians contend for the faith properly. This means that there are certain things that we are going to speak up about and certain things we are going to shut up about…even if we feel strongly about them.

Before I give all of you the “what this means for you portion,” let me finish telling you how God showed this to me. In the midst of sitting here trying to find something to write a post about that wasn’t political, I began to think about what the ultimate goal of this site is. Why do I do this, why do the other writers do this? Is it because we get some narcissistic kick out of knowing that are fairly large number of people will read our words? Nope. Is it to give our opinion on issues? Nope. Then why are we here? That is when the repeating words of Solomon came to me from Ecclesiastes 1-2. Within these two chapters reside a narrative of a small journey where Solomon speaks of his experiences and disclaims at the end of it all that they are all meaningless, that they are all a chasing after the wind. Those last four words are what came into my head initially and as they did, the realization that I had been approaching a few things at an awkward angle became evident to me.

For the past couple months I have been getting hung up on issues related to racial injustice, gun control measures, and a certain toupeed fascists winning a presidential nomination (this is me kidding…kinda). These issues have become central to my daily dialogue as I’ve tried to intersect Christian theology with real world issues. The problem is that without me really noticing, Jesus faded into the background. Day after day I became more and more certain that human action was needed to prevent the world’s ills, that we could prevent the world’s ills. That is where these last four words “chasing after the wind” struck me like a freight train. It was in that moment that I recognized something, even if humanity could do all that I and others had set out for it to do, it did not matter.

Why? Because if what we are doing is not bringing attention and glory to Christ, it was for nothing. Solomon realizes that all that this world has to offer is hollow, short, and temporary. The only thing worth a long-term investment is time spent with God and his people. Time spent in worship, fellowship, and prayer. Here is the ultimate aim of every Christian: to preach Christ and him crucified. To go making disciples of all nations baptizing them in the Father, the Son and the Holy Spirit. Every other goal beside this goal are but mere trinkets. For me this means that I have to drop some of the things I hold dear and focus on proclaiming Jesus. It means that I have to put aside my own ideas of how things should work (even if I have biblical argument for them) and focus on proclaiming and spreading the gospel.

Christians, you are here with the sole purpose of telling people who Jesus is by how you live, what you say, and how you spend your time. You are not showing people Jesus by telling them they are being racist, or by calling them bigots. You do not show them Christ by treating a human being made in God’s image and likeness like less of a human being because of their sexual orientation or gender confusion. Will the church have to handle these issues within her own doors? Yes, but how we conduct ourselves in those moments is representative of Christ. When we flagrantly ignore sin or are eager to be God’s hand of wrath we show ourselves to be false. Will we continue to waste our time and our resources on issues like abortion, racial inequality, homosexuality, and the like, when we know the fix for each of these issues? Why do we continue to point to ourselves and our own ability to advocate for ourselves instead of truly going to the one person in all of the universe who can bring it to an end? Why do we continue to push people further and further away from the gospel because of our own personal feelings or convictions about something?

It is because, ultimately, we haven’t really submitted. We haven’t really given him the keys to the car, have we? In scripture (1500 years of recorded history) not one time do we see God command Israel to work within the political system to bring about his means. He commanded foreign powers to obedience, he placed individual Israelites in positions of power, but notice that he NEVER called the people of God to a social issue. Abortion is not new, homosexuality is not new and yet we see nowhere in the exile books that God commands Israel to work to eradicate these sins within a sinful depraved society? Israel has been ruled by powers that make us look tame, civilizations like Rome, Seleucia, Macedonia, Babylon, Persia, Egypt, and so on. Why then do we feel we are different?

One of my favorite metaphors within all of scripture that depicts the Christian life is that of a soldier. We are an army, each needing the person next to them to hold rank and remain vigilant as we follow our King and commander into battle to slay the enemy. But who is the enemy? This is where we have a tendency to make our mistakes. To answer that question I am going to quote from a sermon John Piper did back in 2002.

The enemy is not others; it is ourselves, our own impulses, our own tendencies, our own sin. In other words, if you feel strongly about an issue then be sure that you yourself are not guilty of perpetrating it! So what does all this mean? Here is where the application of this comes into play. See, if you really care about the issues you say that you care about (issues like injustice and abortion) then you really need to be preaching the gospel. If we truly cared about these issues, we would be spreading the gospel, casting a net as wide and long as humanely possible. The truth is, we like control, and we like accomplishment and we do not like waiting on God.

Now think on this for a moment. Could it be that you actually doubt God’s ability and provision to distribute justice justly? Do you fear that God may not see certain sins as grievously as you do? Could it be that in acting in some areas at the exclusion of others that you are actually showing that you have more faith in the ability of humanity to conduct change than God? The gospel is intended to show people who Jesus is, allowing us to follow him with all of our being. In doing this we change, not on our own accord, but by the work of the Holy Spirit. This same Holy Spirit should be active in how we perceive this universe. If we truly believe in the transforming work of the Holy Spirit, by the power of the Son, in the name of the Father should we not be pointing as many to Christ as possible? Should we not be shouting his name at every opportunity, seeking to reconcile and pursue justice under one banner?

YES!!! We should be, and the best way to do that is to introduce as many people to Jesus as possible. So if you hate abortion, or racism, or injustice, preach Christ and him crucified! For it is by him that we are set free from such things. Passing a law merely restrains sin, we are called to obliterate it completely. The only way that we can accomplish that goal is through the proclamation of Christ’s name. So stop wasting your time with movements and causes and fully commit yourself to the cause of Christ pointing to him in all that you do. Do not let your life go wasted in pursuing things that Christ already won for us. Merely point others to him, so that he can dispense these things. Peace and Blessings friends, and as always thank you for reading.

With Love In Christ